Medically reviewed by Lynn Marie Morski, MD, Esq.
Written by Hayley Rees, HBCom
4 min read
0 comments
Read Later
The following is for informational purposes only. WayofLeaf does NOT advocate the illegal sale, use, or possession of any psychedelics. Be sure to research, understand, and follow all laws and regulations relating to the use and possession of psychedelics in the state or region you live.

Datura stramonium, also known as jimson weed, devil’s snare, or thorn apple, is a commonly found weed native to Central America. Datura is the scientific name for a genus that contains 9-12 species of flowering plants in the nightshade family. It is known worldwide for its potential use as a medicine, poison, and entheogen and has been used in religious and cultural rituals for centuries.

Before you decide to try it at home, be aware that every part of the datura plant is extremely poisonous.

Today, some people use it as a recreational drug since it is known to cause hallucinations and gives a heightened sense of well-being (euphoria). But before you decide to try it at home, be aware that every part of the datura plant is extremely poisonous. Numerous unintentional datura poisoning deaths occur every year, and adverse reactions are common.

That said, when consumed with professional guidance, datura can also be a surprising powerhouse of medical components if appropriately purified.

What to Expect from a Datura Stramonium Trip

Datura contains chemicals such as hyoscyamine, scopolamine, and atropine. These chemicals interfere with a chemical messenger known as acetylcholine, found in the brain and nerves.

While it is impossible to predict the exact experience of any psychedelic trip, it is complicated when it comes to Datura stramonium. Due to the variable concentrations of alkaloids found in datura plants, providing any “safe” dose range is challenging. Moreover, the Datura stramonium effects can last for two days, and the experience can be overwhelming and even uncomfortable.

That said, there are a few things you can anticipate with a datura trip. 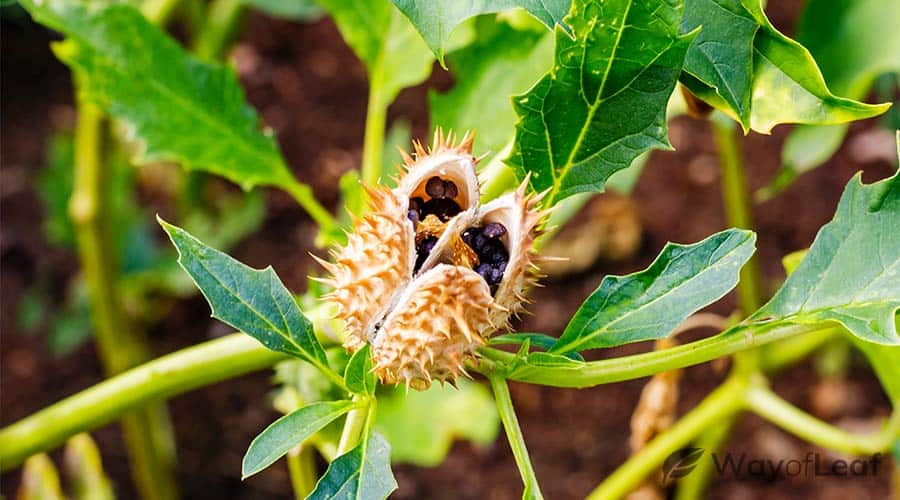 Consumers typically feel the first effects within 30 minutes to an hour of using it, but it could take up to four hours to manifest fully. The peak effects can last for several days but generally only last for between 12 and 24 hours. Users may also experience some lingering effects that include changes to speech, perception, and coordination for up to a week after the trip.

It is common to experience pupil dilation, dry mouth, weightlessness, and a feeling of electricity and energy changes during onset. There is also a gradual dissociation from reality, which may be frightening for some people.

Although some people might enjoy the Datura stramonium trip, it comes with many risks. Therefore, people should use it with extreme caution. Many people have died after ingesting datura, and the cause of death typically is heart failure or respiratory paralysis. In some cases, a fatal reaction can take 12 or more hours to manifest.

Unfortunately, it is easy to misjudge how much datura one is taking. As little as 15 grams (equivalent to between 15 and 25 seeds) can lead to a fatal dose.

Additionally, there are a few side effects, which can last long after the high wears off. Datura is a poisonous plant and can cause several toxic effects, including:

What to Know About Datura Hallucinations

For many people, the datura experience can be eye-opening and mind-expanding in much the same way as other psychedelic plant medicines. Even after experiencing an uncomfortable or frightening trip, many people report that the insight gained was worth it for their own personal healing and growth.

Surprisingly, hallucinations on datura can appear perfectly normal, even if they’re entirely out of context. Often inanimate objects will start talking, while absent family and friends’ unexpected appearance is also typical. Not distinguishable from real people, these objects may stand and stare without saying anything, or they might start an active conversation. Most people don’t even realize they’ve been talking to themselves until they turn away for a moment, and the manifestation disappears. 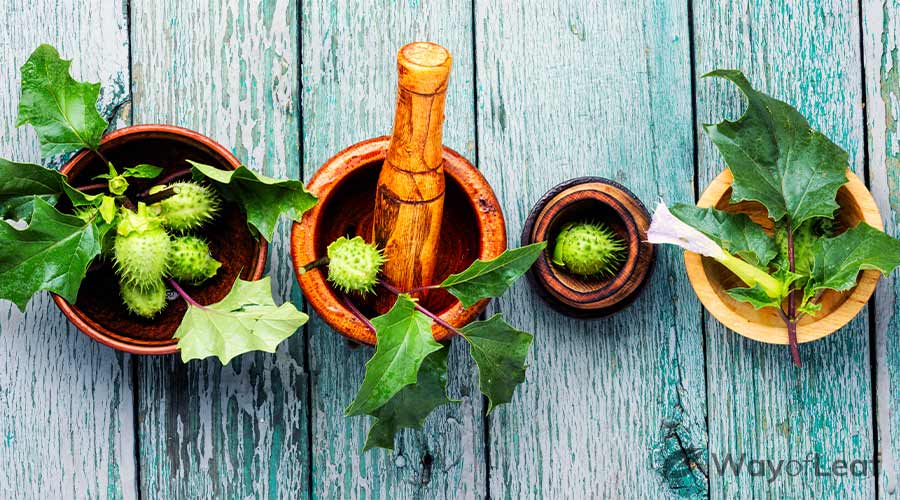 Many datura users describe the experience as like a waking dream. Everything looks and seems completely normal. There are no colorful geometric patterns or anything similar, like with most other psychedelics. Individuals turn around and find themselves having a conversation with a bear, and that seems normal. Then, they turn back, and it has disappeared. Additionally, hallucinations affecting the senses of smell, taste, and touch are common.

What Are Datura Stramonium’s Medicinal Uses?

As a whole, datura plants have several characteristic properties. These include:

Owing to its potential therapeutic effects, the entire plant (fresh or dry leaves, roots, seeds, or fruits) has carved its way in various traditional and alternative medications.

There are three chemicals naturally produced by datura plants; hyoscyamine, atropine, and scopolamine. To get a better understanding of Datura stramonium use in medicine, let’s look at the medical uses of each of these three chemicals.

In the form of a prescription patch, a common use for scopolamine is to manage motion sickness. It has also shown promise as a fast-acting antidepressant.

As an antispasmodic, hyoscyamine can be used to treat ulcers, pancreatitis, and irritable bowel syndrome (IBS), as well as other stomach issues.

It is important to note that each of these constituents also comes with several potential side effects.

It is important to note that each of these constituents also comes with several potential side effects. However, when used separately and under the supervision of a medical professional, side effects can be better controlled, and the drugs are generally safe. But when used in combination, as in daturas, they can be very dangerous.

Anyone thinking about trying Datura stramonium should make sure to consult with a professional first. They should fully understand the potential risks and dangers, including adverse reactions and even death, and take precautions to minimize the risk of experiencing serious complications.