Written by Natalie Saunders, B.A., LicAc
5 min read
0 comments
Read Later
The following is for informational purposes only. WayofLeaf does NOT advocate the illegal sale, use, or possession of any psychedelics. Be sure to research, understand, and follow all laws and regulations relating to the use and possession of psychedelics in the state or region you live.

Many people experience a particular frame of mind after taking magic mushrooms. A peculiar state of limbo occurs as they wait for the trip to begin. This waiting period is often characterized by looking anxiously at the clock, wondering how long it has been and why nothing is happening. Or is it?

Experienced psychonauts may be able to recognize the subtle signs of intoxication fairly quickly and know that the peak is on its way. However, for novices, the wait can feel uncertain, tempting them to ingest a larger dose before the original takes effect.

Since this is usually not a good idea, we have aimed to answer the common question, “how long does it take mushrooms to kick in?”

However, as is often the case in the mysterious world of magic mushrooms, the answer is rather complex. Many different factors can influence the speed at which shrooms affect a person. To understand why, first, we must look at the science of psilocybin.

Psilocybin: Onset and Duration of Effects

Most people know that psilocybin is the chemical responsible for magic mushrooms’ effects.

However, not everyone realizes that psilocybin is what is known as a prodrug. In the body, it is converted to another compound called psilocin, which is what binds with serotonin receptors causing psychedelic effects. 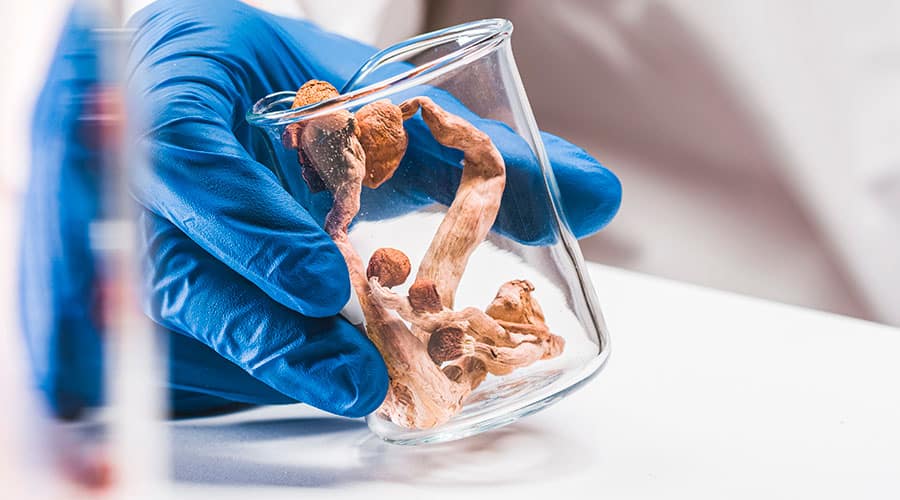 Psilocybin breaks down into psilocin through a reaction called dephosphorylation. Much of this takes place in the acidic conditions of the stomach. Enzymes carry out the remainder of the reaction in the intestines.

Once psilocybin has converted into psilocin, it absorbs into the bloodstream and is transported to the brain. Psilocin becomes detectable in human plasma (the liquid component of blood) after 20–40 minutes. Therefore, people usually begin to feel the effects of mushrooms after 30–60 minutes, although it can be less or more in some instances.

Psilocin reaches its maximum plasma concentration 80–100 minutes after ingestion, causing the trip to peak. It then plateaus for approximately 50 minutes before slowly declining, with the entire experience lasting up to six hours. After the peak, the effects may come in waves of greater or lesser intensity until they wear off completely.

Now, let’s look at some factors that could alter how long it takes for magic mushrooms to kick in.

Because mushrooms have to pass through the digestive system, how much food one has consumed beforehand can significantly affect their onset time.

Having a full stomach delays the breakdown of psilocybin into psilocin and its subsequent absorption into the bloodstream. Therefore, eating a heavy meal just before ingestion can mean shrooms kick in more slowly, possibly taking an hour or more to affect.

We recommend waiting for at least 1–2 hours after eating a large meal before consuming mushrooms. However, some people like to take their shrooms with a light snack to aid ingestion and avoid becoming hungry halfway through the trip.

Shrooms kick in significantly faster when the stomach is empty. It may be possible to feel the effects after just 20–30 minutes. However, this figure can vary from person to person and depends upon various other factors, which we discuss below.

Different consumption methods can also affect how long it takes shrooms to kick in. Here are some common examples:

Mushroom capsules are capsule casings made from gelatin or cellulose that contain ground mushroom powder. This ingestion method may take longer to affect since the stomach has to break down the capsule casing and the mushrooms’ cell walls.

Mushroom cell walls are made of a compound called chitin, which is generally considered difficult to digest. Moreover, some people lack chitinase, the specific enzyme that breaks it down.

Therefore, mushroom capsules may take longer to kick in than other methods. The same goes for any method involving ingesting dried mushroom material, such as mushroom chocolate or other edibles.

It is possible to make shroom tea using either fresh or dried mushrooms.

Psilocybin is water soluble. Therefore, infusing it into tea makes it easier for the stomach to access by removing the need to digest the mushrooms themselves. Therefore, the onset of effects is faster than if the mushrooms were eaten or taken as capsules.

That said, some people consume the mushrooms as well as the tea to avoid wastage. The texture of stewed shrooms isn’t pleasant, though, so if using dried mushrooms, grind them to a powder first. This will also increase the surface area available for psilocybin extraction.

If using fresh mushrooms, keep them intact, as cutting or grinding them could reduce their potency (find out why in our article about why magic mushrooms turn blue).

Lemon tek is a technique that is widely believed to make shrooms kick in faster and increase the intensity of their effects. The trade-off is that the overall duration of the trip may be reduced by an hour or two.

It involves soaking the mushrooms in lemon juice for 15–20 minutes to recreate the acidic conditions of the stomach. The exact science behind how it works is unclear. However, many believe that it effectively “pre-digests” the mushrooms’ cell walls and starts off the conversion of psilocybin to psilocin.

Anecdotal reports suggest that lemon tekking shrooms can produce effects in as little as 10–45 minutes. For complete instructions and to learn more about this technique, check out our in-depth lemon tek guide.

Does Dosage Affect How Long Shrooms Take to Kick In?

In theory, dosage should not affect how long it takes for shrooms to kick in. However, a larger dose means more pronounced effects, which may become obvious more quickly. The same applies to stronger mushroom varieties that contain more psilocybin per gram.

How Long Do Shrooms Take to Kick in the First Time?

It takes the same length of time for shrooms to kick in, whether it is the first or fifteenth time someone takes them. However, as people become more familiar with mushrooms’ effects, they may notice the tell-tale signs more quickly. 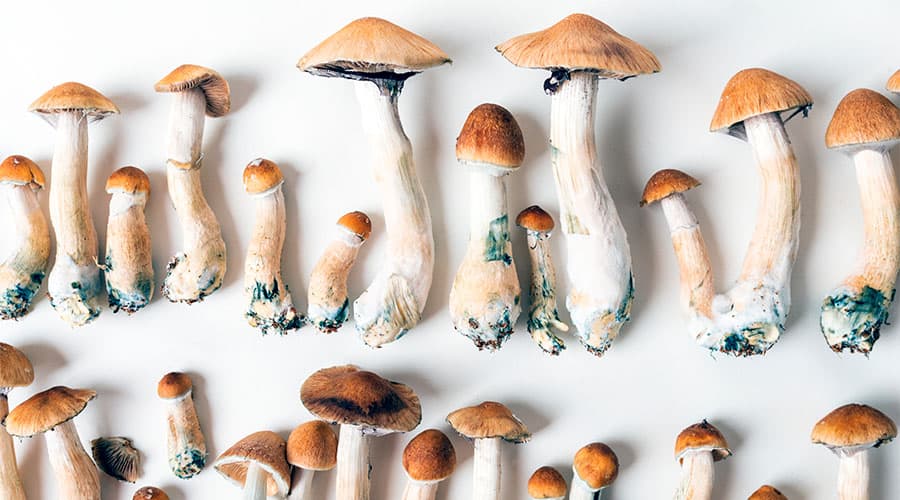 Furthermore, it is possible to build up a tolerance to mushrooms if they are used repeatedly in a short space of time. In this situation, the effects may be less pronounced and appear to occur more gradually.

The Impact of Set and Setting

“Set and setting” is a term used to describe a person’s mindset and physical environment when ingesting psychedelics. Although these factors do not affect the rate at which effects occur, they might impact one’s ability to notice.

For example, a person sitting in a quiet bedroom and meditating might experience subtle effects more quickly than someone who is in a social setting or otherwise distracted.

It is always advisable to be somewhere safe and comfortable while waiting for shrooms to kick in. Their effects can be unpredictable, and it is best to remain in a controlled environment until they reach their peak. Having an experienced friend or professional guide on hand to offer support is recommended, especially when taking shrooms for the first time.

How Long It Takes for Shrooms to Kick In: Final Thoughts

Many different factors can influence how long it takes shrooms to kick in. From how much food is in the stomach to the chosen ingestion method, effects could appear after just 10 minutes or up to an hour. It could take even longer in some situations, such as having eaten a large meal beforehand.

Of course, mushrooms affect everyone differently, and the above information is only a general guide. It is the individual’s responsibility to learn how they respond to mushrooms by starting with a low dose and paying attention to the results.

How to identify the LBMs and beyond

3 min read
TOC
Premium
Your subscription has ended
If you love cannabis and want to support our site, join WayofLeaf Premium today and unlock
Best of all, part of your membership fee will go towards supporting the fight to legalize cannabis.
Sign Up for WoL Premium
Not now
I already have an account
×
Log in to Your Premium Account