Medically reviewed by Lynn Marie Morski, MD, Esq.
Written by Martha Allitt
6 min read
0 comments
Read Later
The following is for informational purposes only. WayofLeaf does NOT advocate the illegal sale, use, or possession of any psychedelics. Be sure to research, understand, and follow all laws and regulations relating to the use and possession of psychedelics in the state or region you live.

Psychedelics are becoming increasingly more popular. With more people curious about experimenting with psychedelics – it’s essential to understand the effects these drugs have.

The classical psychedelic LSD, also known as acid, has been used for therapeutic and recreational reasons since its discovery in 1943 by Albert Hoffman. The LSD experience, commonly referred to as an “acid trip,” is renowned for inducing mind-altering effects.

The media has historically exaggerated and over-emphasized psychologically harmful effects of LSD. By analyzing the acid trip, we hope to debunk some of these myths and explain how to reduce the risk of potential psychological harms.

How Long Does an Acid Trip Last?

LSD often comes in the form of tabs and is taken orally. Tabs are cut-outs from pieces of paper dipped with the LSD liquid. Users often place these under the tongue, so the LSD dissolves into the bloodstream for a quicker effect. 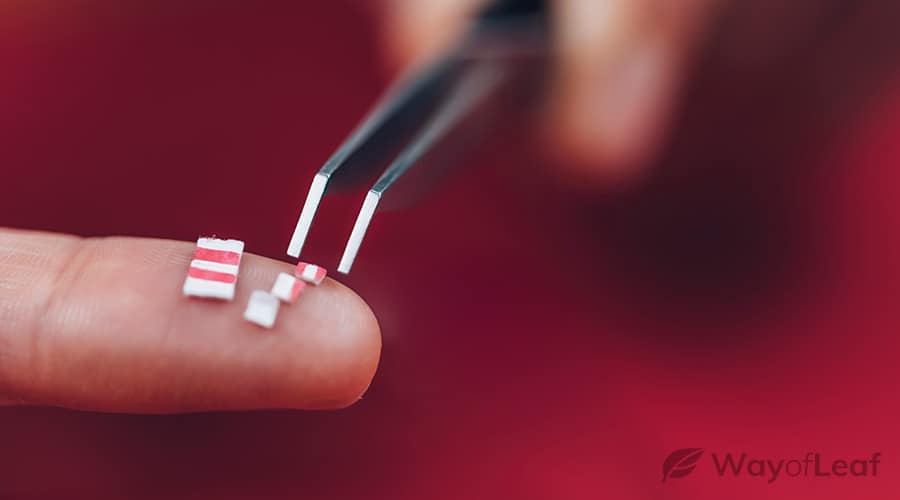 When taken orally, it takes roughly between 20 to 90 minutes to feel the effects of LSD, and these effects usually last around 12 hours. The peak effect (point of the experience in which effects are most potent) commonly occurs about 170 minutes after taking the drug.

After ingestion, LSD remains in the blood for at least 24 hours and in the urine for up to 5 days.

A “bad trip” – or what those working in psychedelic therapy like to call a challenging trip, refers to potentially difficult experiences on LSD and other psychedelics. Difficulties commonly associated with bad trips include panic attacks, confusion, disturbing visions, thought loops and distressing emotions.

Experiencing a bad trip can be traumatic for some people and have long-lasting effects.

Although these adverse effects typically disappear once the drug has worn off, experiencing a bad trip can be traumatic for some people and have long-lasting effects. However, if properly managed, challenging experiences can be used as an opportunity for self-growth.

Controlling the set and setting in which the user takes LSD can decrease the risk of having a bad trip:

Set refers to the user’s mood, intention and recent experiences before going into the trip

Taking LSD when feeling depressed or anxious can increase the risk of bad trips, so it’s preferable to take acid in a positive mindset and feeling calm. Setting an intention before taking LSD can help positively welcome the experience and make the trip feel more purposeful.

Setting refers to the physical environment in which the user takes LSD.

Being in an unfamiliar environment or an environment with negative associations attached could increase the risk of having a bad trip.

To decrease the risk of bad trips, the user should choose a safe environment where they feel comfortable and avoid unfamiliar places or places with negative associations.

When taking LSD for the first time, or at a high dose, a user may choose to have a “trip-sitter” present, a close friend or family member who stays sober and remains with them through the trip and provides any necessary support. Even better to do it with a trained guide.

Integration is the process of understanding and sharing events and insights which have happened during a psychedelic trip.

Sometimes during acid trips and other psychedelic experiences, people may become aware of subconscious psychological material that can sometimes be unexpected and leave the user feeling confused or traumatized following their trip.

Evidence has suggested integration can help decrease the risk of psychological difficulties remaining after the trip.

Integration therapists are trained professionals who can help people make sense of and work through challenges that may have arrived during their psychedelic experience.

The multidisciplinary association for psychedelic studies (MAPS) has a comprehensive catalog of psychedelic integration therapists predominantly in the US. The Institute of Psychedelic Therapy has a similar database for UK therapists.

What Effects Do People Feel During an Acid Trip?

The effects of LSD are highly variable and heavily impacted by set and setting. Because of the variability in mindset and physical space, one acid trip may be entirely different from another. However, there are some common effects of LSD that tend to occur during most acid trips.

LSD is a hallucinogen, meaning it alters somebody’s perception of awareness of their surroundings and can evoke hallucinations, which are experiences of sensations (such as seeing images and hearing sounds) that don’t exist in their usual perception of reality. 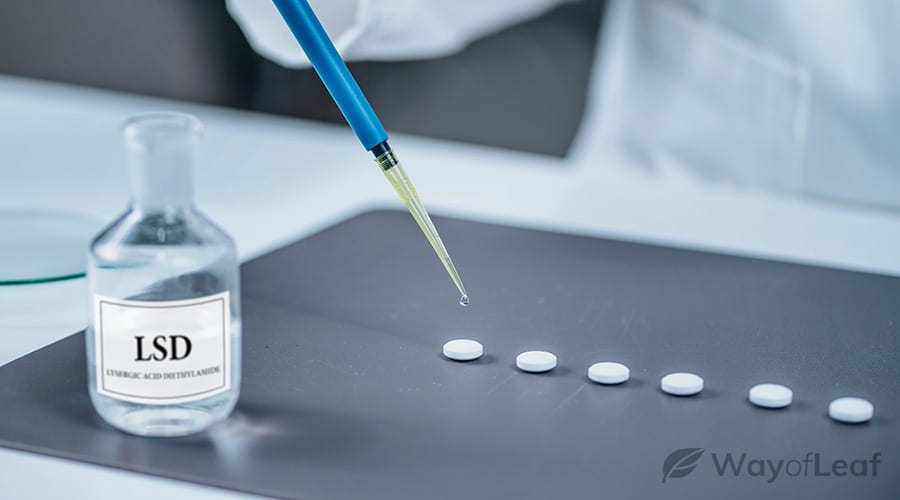 During acid trips, it is common for thoughts to become more disorganized and sensations, such as listening to music, to become intensified. Visual perception typically becomes changed so that geometrical patterns appear on objects, and objects may appear to pulsate.

LSD can have both positive and negative effects on well-being, mood and thoughts. Some of these effects include:

Some of the commonly reported positive effects of LSD on mood and thought include:

Some of the commonly reported negative effects of LSD on mood and thought include:

Some of the commonly reported visual effects on LSD include:

What Are the Side Effects of an Acid Trip?

LSD can have physical effects on the body and effects on perception, thought, and mood. LSD is a sympathomimetic drug, meaning it activates the body’s sympathetic nervous system, increasing the “fight or flight” physiological state.

Some of the common physical side effects of LSD include:

In severe cases, LSD can cause serious adverse side effects. Some of these include:

HPPD is a rare occurrence where the effects of LSD, mainly the visual hallucinations, persist from a couple of weeks up to several years once the drug has worn off. HPPD can be highly unpleasant and make people feel detached from reality.

Controlling set and setting and integrating difficult experiences may help decrease the likelihood of HPPD occurring.

Having a bad trip can increase the risk of HPPD. Controlling set and setting and integrating difficult experiences may help decrease the likelihood of HPPD occurring.

Serotonin syndrome occurs when there is an overload of effects of serotonin, a chemical messenger in the brain. LSD affects the nervous system by increasing serotonin’s effects, meaning combining LSD with other serotonergic drugs increases the likelihood of serotonin syndrome.

Symptoms of serotonin syndrome include:

The effects of serotonin syndrome can be fatal, so if multiple symptoms present during an acid trip, it’s essential to seek medical attention.

A list of drugs that may increase the risk of serotonin syndrome can be found here.

Although psychosis-like symptoms typically disappear once the effects of LSD have worn off, there have been rare cases where LSD has caused prolonged psychosis. As LSD is an environmental stressor, it can trigger pre-existing mental health conditions, which is why people with a diagnosis or family history of bipolar and schizophrenia should avoid taking LSD.

Having a bad trip increases the risk of prolonged psychotic symptoms. Controlling set and setting and integrating challenging experiences may, therefore, decrease the risk for long-term mental health adversities.

Coming Down From an Acid Trip

An acid comedown refers to the period after the effects of LSD wear off.

Typically around 10 hours following the trip, the effects on mood and perception start to wear off, and the user returns to normality. Acid trips are highly mentally stimulating, and the user often has lots of intense emotions and profound thoughts. During the end of a trip, and for the following time after, a person who has taken acid will often feel very tired.

Related article
How Long Does LSD Stay in Your System?

At the end of an acid trip, some people may choose to find a quiet place with very little environmental excitement as a way to feel settled following the intensity of the hours before.

Some users report experiencing an afterglow, a sustained increase in a positive mood for the next 24 hours up to several weeks following the trip.

There is little evidence to suggest that LSD is addictive. However, studies have shown LSD can produce tolerance. Tolerance is when repeated use of a drug means, to elicit the same effects, a higher dose is required. LSD tolerance is dangerous because people repeatedly taking LSD are more likely to use higher doses and experience toxic side effects from an overdose.

In a Nutshell: The Acid Trip Summary

Acid trips can be positive experiences that can be insightful and provide opportunities to learn more about oneself. It is possible to have bad trips, which may increase the risk of long-lasting adverse effects. However, by controlling the set and setting, the likelihood of a bad trip is decreased.

Integrating the experience can also help prevent traumatization and ongoing psychological effects. Integration can also aid self-growth as it enables understanding parts of the subconscious mind that have presented themselves during the trip.

MAPS has published a manual of psychedelic support, which provides important harm-reduction information on how to help prepare and integrate a psychedelic trip.